Did you ever wondered what all the numbers on your PFT mean? Here's an explanation with one of my PFTS 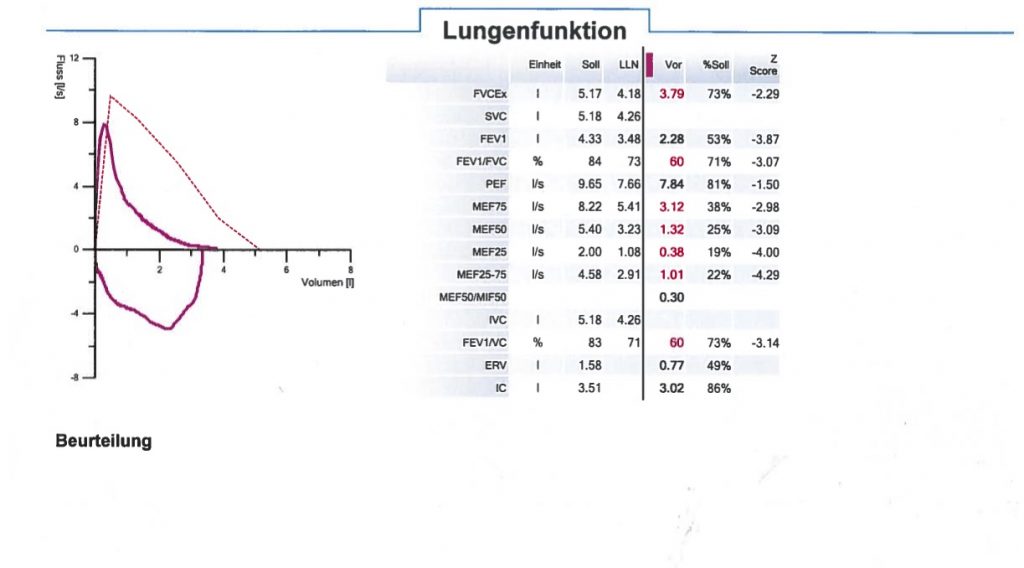 FVCEx - The forced expiratory vital capacity is the maximum amount of air that can be exhaled with pressure.

SVC - With slow exhalation or inhalation, a vital capacity (SVC) can be measured that is less dependent on bronchial resistance and usually results in slightly higher measured values than the FVC.

PEF - This is the strength of the respiratory flow at a certain inhaled or exhaled volume. An example is peak expiratory flow (PEF). This is the maximum flow rate that can be achieved with forced exhalation.

MEF75 - This value indicates how fast the air flows out of the lungs at a certain point in time. The MEF75 value is measured when a quarter (MEF50 - half, MEF25, three quarters) of the air to be exhaled has already left the lungs. With the MEF75 value, the doctor can estimate whether the airways are narrowed.

FEV1/VC - Relative one-second capacity (also called Tiffeneau index or FEV1/VC value) is a relative value and is expressed as a percentage of vital capacity. The target value should be higher than 75 percent of the vital capacity.

A few questions and answers

What is the most important value for us CFers?

For us the most important value is the FEV1 value. This indicates how flexible our lungs are. A low FEV value (compared to the last test) can be a sign of infection.

Of course, 100% would be desirable, but very few of us do. Everyone has a level that has to be kept as long as possible.

In fact it is and usually occurs with professional endurance athletes or apnea divers.

How can I improve my FEV1?

Part of it will depend on your infection level. However, your FEV1 can be positively influenced by a lot of therapy, endurance sports and a healthy lifestyle.

If you always have a very high FEV1 on average anyway, that can be good. If not, then unfortunately I have to say that this will probably not be possible. I've had around 50% FEV1 for years and won't be able to reach full power anymore. With a lung transplant it looks different again. Nevertheless, a deeper FEV1 does not necessarily mean that we are in a bad state or that our endurance is on the ground. The body gets used to the new situation relatively quickly. But try to keep your level as long as possible.